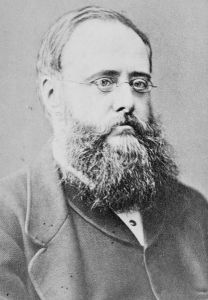 Among the more illustrious names found in the Bradford scrapbooks is that of the novelist and playwright Wilkie Collins (1824-1889). Collins, a close friend and protégé of Charles Dickens, was perhaps best known for his novel The Woman in White, which helped launch the genre of “sensation” fiction — fiction which included murders, scandalous behavior, and often a slight whiff of the supernatural.  But there was another, much more pivotal work of Collins’s that explains why he and Bradford would have had already had an interest in each other’s work — a play he wrote, and which was produced by Dickens in 1857 — The Frozen Deep.

The play was a melodrama with an Arctic theme, including a house full of the wives of a group of lost polar explorers, a Scots nursemaid given the gift of “second sight,” and a love triangle involving two of the explorers and the woman they both loved. All of these details would have evoked the tragic Franklin expedition of 1845, including the faithful wife, then widow, Lady Jane Franklin and her niece Sophia Cracroft, who had twice rejected the love of Francis Crozier, Franklin’s second-in-command. Both Lady Jane and Sophia also signed Bradford’s book, so the subject was certainly close at hand in more ways than one — but it was Collins’s play, more than any other literary work, which served to memorialize Franklin in the public eye. After its success in his home theatre and a command performance before the Queen and Prince Albert, Dickens hit on the idea of a series of public performances of the play in Manchester to raise money for the widow of his recently-deceased friend, the journalist Douglas Jerrold. The performances elicited a tremendous amount of emotion from their audiences — Dickens confided to his friend Mrs. Coutts that he reveled in the nightly “crying of two thousand people” at the theatre, apparently including the other actors and stage-hands! And, fatefully, it was a young woman hired for this production by Dickens, Ellen Ternan, who would win the heart of the great writer, an affair which led to Dickens’s permanent separation from his wife Catharine. Bradford must have known of Collins’s, as well as Dickens’s, fascination with the Arctic, and he and Collins enjoyed a private dinner at Collins’s house in London during his first visit there.

Collins’s reputation was at its peak in 1871, which was the year the photographic portrait above was made. Since, due to the rather gaping holes in copyright law at the time, Collins made little money from American reprints of his books, he decided to embark on a series of Dickens-style lecture tours of the United States and Canada, and partly for that purpose he converted The Frozen Deep into a novella, scenes from which were frequently part of his recitals. On his next tour, he accepted the reciprocal hospitality of Bradford, staying at his home near New Bedford; the local papers, though critical of the recital itself (“Mr. Collins, though an animated reader, has no great power of voice, and it was lost in the hubbub caused by the ill-mannered crowd”), made much of his stay with Bradford, noting that Collins “expressed himself delighted with his audience and the numerous attentions paid him.”

Russell A. Potter has been fascinated with the Arctic regions for many years, and has written and lectured extensively on many different aspects of its history. His book Arctic Spectacles: The Frozen North in Visual Culture, 1818-1875, is required reading for anyone interested in our Arctic Visions exhibit. In addition to contributing to this blog he is providing critical guidance as Curatorial Consultant, and has authored the Introduction to our re-publication of Arctic Regions.