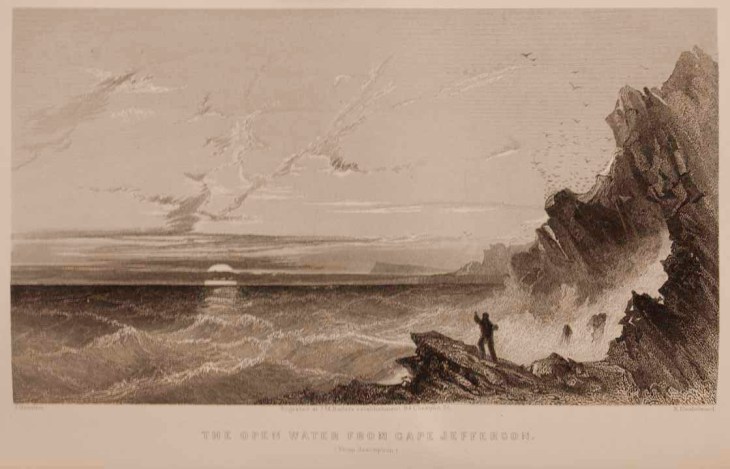 POSTED BY FRAN HENNESSEY
Led by Elisha Kent Kane, M.D., the Second Grinnell Expedition (1853-1855) continued on-going searches for the missing Franklin Expedition. According to Kane’s writings in Arctic Explorations, his approach was to take a course that should “lead most directly to the open sea of which he had inferred the existence” and to “examine the [Greenland] coast-lines for vestiges of the lost party.” Within the first dozen or so pages of his book, Kane had established the theoretical existence of an open polar sea.

An open sea near the Pole, or even an open Polar basin, has been a topic of theory for a long time, and has been shadowed forth to some extent by actual or supposed discoveries. As far back as the days of Barentz, in 1596, without referring to the earlier and more uncertain chronicles, was seen to the eastward of the northernmost cape of Novaia Zemlia; and, until its limited extent was defined by direct observation, it was assumed to be the sea itself.

The Dutch fisherman above and around Spitzbergen pushed their adventurous cruises through the ice into open spaces varying in size and form with the season and the winds; and Dr. Scoresby, a venerated authority, alludes to such vacancies in the floe as pointing in argument to a freedom of movement from the north, inducing open water in the neighborhood of the Pole. [1]

Kane also theorizes a milder climate towards the [North] Pole; however, he does not provide an explanation as to how such an open sea may exist:

It is impossible, in reviewing the facts which connect themselves with this discovery, — the melted snow upon the rocks, the crowds of marine birds, the limited, but still advancing vegetable life, the rise of the thermometer in the water, — not to be struck with their bearing on the question of a milder climate near the Pole. [2]

While discussing the northern extent of the search for Franklin, Kane provides the number of miles searched and approximate longitude and latitude coordinates of ice-free water:

During this period [August and September, 1854] the labours of the expedition have delineated 960 miles of [Greenland] coast-line, without developing any traces of the missing ships or the slightest information bearing upon their fate. The amount of travel to effect this exploration exceeded 2000 miles, all of which was upon foot or by the aid of dogs.

Greenland has been traced to its northern face, whence it is connected with the further north of the opposite coast by a great glacier. This coast has been charted as high as lat. 82° 27’. Smith’s Sound expands into a capacious bay: it has been surveyed throughout its entire extent. From its northern and eastern corner, in lat. 80° 10, long. 66°, a channel has been discovered and followed until further progress was checked by water free of ice. This channel trended nearly due north, and expanded into an apparently open sea, which abounded with birds and bears and marine life. [3]

Kane recorded these observations of open Arctic water north of Cape Andrew Jackson, and his findings were reportedly corroborated by Isaac I. Hayes, M.D., Hans Hendrik, and by notations in William’s Morton’s journal:

The journeys which I had made myself, and those of my different parties, had shown that an unbroken surface of the ice covered the entire sea to the east, west, and south. From the southernmost ice, seen by Dr. Hayes only a few weeks before, to the region of the mysterious water, was, as the crow flies, 106 miles. But for the unusual sight of birds and the unmistakable giving way of the ice beneath them, they would not have believed in the evidence of eyesight. Neither Hans nor Morton was prepared for it.

Landing on the cape, and continuing their exploration, new phenomena broke upon them. They were on the shores of a channel, so open that a frigate, or a fleet of frigates, might have sailed up it. The ice, already broken and decayed, formed a sort of horseshoe-shaped beach, against which the waves broke in surf. As they travelled north, this channel expanded into an iceless area; “for four or five small pieces” – lumps – were all that could be seen over the entire surface of its white-capped waters. Viewed from the cliffs, and taking 36 miles as the mean radius open to reliable survey, this sea had a justly-estimated extent of more than 4000 square miles. [4]

Note: Line-of-sight to a 36-mile water horizon requires the viewer to be ~650 feet above mean sea level.

Polynyas are semi-permanent open water greater than five square kilometers and are surrounded by sea ice. Generally, they are formed by two mechanisms: 1) upwelling warmer sea water melting surface ice, and 2) wind and wave-action breaking ice, particularly thinner first-year ice, that is then widely dispersed by wind and by water currents. These hydrodynamic forces in combination can potentially open vast areas of Arctic seas in summer and/or winter with year-to-year variations, forming polynyas that range in size 10 to 100 kilometers. [5,6]

The Canadian Arctic Archipelago has at least 23 documented polynyas and several shorelead polynyas, the latter of which can extend hundreds of kilometers. Of note, the North Water (NOW) polynya is one of the largest and most widely studied, occupying much of Smith Sound and extending north towards the southern entrance of Kane Basin. Smaller polynyas are present at Flagler Bay (Ellesmere Island), and at the confluence of Robeson Channel and the Lincoln Sea. Numerous smaller, transient polynyas can be found year round throughout the Arctic, and at times, along the Ellesmere-Greenland waterway. [7]

Kane alluded to the importance of polynyas to nearly all Arctic animals, especially marine mammals, when he observed that the open sea “abounded with birds and bears and marine life.” According to Martin, the NOW polynya “contains large concentrations of white whales, narwhals, walruses, and seals, with polar bears foraging along the coast… All of this suggests that polynyas are vital for the overwinter survival of arctic species. [8]

Because 19th century Arctic explorers lacked adequate instrumentation to study and measure Arctic polynyas, Kane and others theorizing them as an open sea is understandable, since their presence had been observed for hundreds of years by Arctic region fishermen and explorers. Kane, nonetheless, had identified one key element of polynya formation, comparatively warmer water (though without the upwelling component). Because these open areas of water were predictable along the Ellesmere-Greenland coastlines, Kane aptly utilized them as part of his overall strategy when searching for the lost Franklin Expedition. Research continues on the formation and oceanographic characteristics of Arctic and Antarctic transient polynyas.